Career journalist, Phi Beta Kappa graduate of the University of Kansas and founder/editor of masterstrack.com

But Chuck Rozanski didn’t get one. So the 62-year-old founder and president of Mile High Comics — considered the biggest comic-book seller in the country — won’t be at this month’s San Diego Comic-Con for the first time in 44 years. “You have to understand,” he said by phone Thursday from his “Cathedral of Comics” in Denver.
Link to Story

Retired to a Las Vegas suburb, John Coleman is happily playing poker and handicapping the weather. The entertaining former KUSI meteorologist is on Twitter forecasting his own view of the Aug. 21 solar eclipse. He’ll join his extended family in Carbondale, Illinois, for the sky show. “The stadium at the university will be Eclipse Central,” he says of the school where he graduated with a journalism degree in 1957.
Link to Story

Two decades ago, John Coleman backed Texas billionaire Ross Perot and his bid for the presidency. “I was co-chair of the Perot California Election Committee and very, very active in the Reform Party,” said Coleman, the now-retired KUSI weatherman. He also put his mouth where his maverick politics were.
Link to Story

John Coleman says Al Gore started it — the “global warming silliness.”. But now the retired KUSI weatherman is “horrified” to see San Diego Mayor Kevin Faulconer channeling the ex-veep with a Climate Action Plan. It “just turns my stomach.”. “I think he saw money and power, and I don’t know what else he thought of it,” Coleman says of the Republican mayor.
Link to Story

How a Church Secretary, 25, Was Picked for La Mesa School Board Over 4 Experienced Rivals

Blessed with an agile mind and the right political affiliation, a 25-year-old church secretary and events planner recently was appointed to the La Mesa-Spring Valley school board. who registered to vote a day after the seat’s application deadline — is one of the youngest school board members in the state.
Link to Story

‘I Take the Bible at Its Word,’ Says La Mesa’s New School Board Member

In 2011, Rebekah Winfree was recorded playing guitar and singing Beyoncé’s “Halo,” whose lyrics apparently spoke to her Christian spirit: “You know you’re my saving grace / You’re everything I need and more. … Baby, I can feel your halo / Pray it won’t fade away.”. the newest member of the La Mesa-Spring Valley school board — the 25-year-old Bible college graduate has visited at least four district schools, attended a districtwide parent meeting and studied board agendas for its twice-monthly sessions.
Link to Story

Thirty years after its North County founding, Competitor Magazine is folding as a monthly print publication. Its last issue will be November/December, but the website will remain. Jessica “Jessie” Sebor, who had been vice president of media for recently sold Competitor Group Inc., said she was laid off Thursday in a conference call.
Link to Story

La Mesa’s new school board member voted in Georgia’s November 2016 election despite later swearing that she had been a resident of the East County district for 1 1/2 years — going back to about January 2016. Rebekah Basson, the 25-year-old church secretary named to a La Mesa-Spring Valley School District vacancy in August, now faces questions of potential voter fraud.
Link to Story

Khizr Khan paid the World Series no heed. He smiles wistfully when asked about cricket, the national pastime of his native Pakistan. “I don’t have time for popular culture yet, but God willing soon,” he said Wednesday after his 163rd public appearance since the July 2016 Democratic National Convention.
Link to Story

The Case of the Missing Alpine High School

Tiny Alpine has begged for its own high school since the late 1990s. It thought it would finally get one when a campus was mentioned in two winning school bond measures. It still hasn’t, and the culprits blocking the school range from various district officials to President Ronald Reagan. Last December, backers of a still-unbuilt high school met at Alpine Tavern & Grill.
Voice of San Diego Link to Story

How Boltman Became a Fan Favorite and the Chargers’ Nemesis

He’s loved the Chargers for a lifetime — even taking the field with the team in 1996 and 1997. But in the mascot game, Dan Jauregui of Ramona is roadkill. Even as the self-proclaimed “No. 1 Bolts fan” attends public meetings and privately counsels the mayor on a plan to keep the Chargers in San Diego, the NFL team itself hates his guts.
Voice of San Diego Link to Story

Warwick’s in La Jolla has canceled a book-signing event by former SeaWorld trainer John Hargrove in the wake of a video being released that shows him repeatedly using the N-word in a phone chat. Hargrove has been on a promotional tour that included appearances last week on NPR, CNN and “The Daily Show” with Jon Stewart.
Link to Story
View More Stories

Ken earned a bachelor of science in journalism degree from the University of Kansas, graduating Phi Beta Kappa, and worked at 10 newspapers, including 24 years at The San Diego Union-Tribune.

He also has this digital journalism experience:

In February 1996, he founded the Masters Track & Field Home Page. It won AOL Member Home Page of the Week in November 1996.

In 1999, he registered masterstrack.com and within a few years it was ranked No. 1 in Google for “masters track” searches. He also edited and co-wrote “Masters Track & Field: A History” (McFarland & Co., 2000).

In 2003, Ken started a blog at masterstrack.com. As of February 2015, it had 4,800 posts and 27,000 comments. In 2009, he won the first Adam Jacobs Memorial Award for excellence in online journalism from TAFWA, Track and Field Writers of America.

Also in 2003, he moved from the sports copy desk at The San Diego Union-Tribune to the paper’s website, SignOnSanDiego.com, and was part of a team that won an “online Pulitzer” from the Online News Association for breaking news coverage of the 2003 county wildfires.

In 2004, he was the first to live-blog the U.S. Olympic Trials for track and field. Ken was online production coordinator at SignOn until June 2010, responsible for posting the print edition online, working with the print newsroom and updating the site’s homepage late at night.

In July 2010, Ken became founding editor of La Mesa Patch, which won a third-place award in 2011 for “best overall news site” from the San Diego Press Club. He was promoted to associate regional editor for central and southern San Diego County in March 2012, and eventually came to oversee seven editors and 10 Patch hyperlocal news sites.

He now serves as contributing editor of Times of San Diego, an online news outlet that had 1.24 million visitors in its first year and another Press Club honoree for news site. He freelances, and his photos have appeared on NBC's "Today" show and WBUR Boston's website. 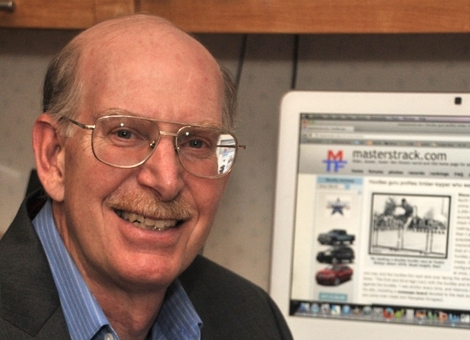